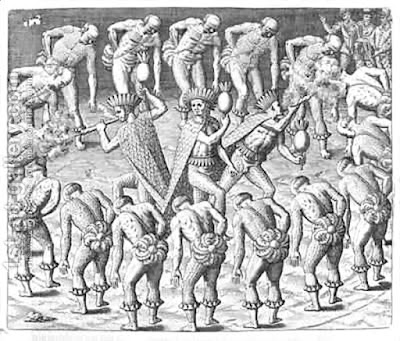 The ambiguities of wonder experienced by European adventurers in the New World, writes Stephen Greenblatt [1], are shown in a passage from History of a Voyage to the Land of Brazil by Jean de Léry. During his stay among the Tupinambá in 1557, de Léry witnessed a solemn religious ceremony which frightened and amazed him:


While we have our breakfast, with no idea as yet of what they intended to do, we began to hear in the men’s house…a very low murmur, like the muttering of someone reciting his hours. Upon hearing this, the women (about two hundred of them) all stood up and clustered together, listening intently. The men little by little raised their voices and were distinctly heard singing all together and repeating this syllable of exhortation, Heu, heu, heu, heu; the women, to our amazement, answered them from their side, and with a trembling voice; reiterating that same interjection, Heu, heu, heu, heu, let out such cries for more than a quarter of an hour, that as we watched them we were utterly disconcerted. Not only did they howl, but also, leaping violently into the air, they made their breasts shake and they foamed at the mouth — in fact, some, like those who have the falling-sickness over here, fell in a dead faint; I can only believe that the devil entered their bodies and that they fell into a fit of madness...

But then the mood shifts:


However, after these chaotic noises and howls had ended and the men had taken a short pause (the women and children were no silent), we heard them once again singing and making their voices resound in a harmony so marvellous [of] sweet and gracious sounds… At the beginning of this witches’ sabbath…I had been somewhat afraid; now I received in recompense such joy, hearing the measured harmonies of such a multitude, and especially in the cadence and refrain of the song, when at every verse all of them would let their voices trail, saying Heu, heuare, heura, heurare, heura, heara, oueh — I stood there transported with delight [tout ravi]. Whenever I remember it, my heart trembles, and it seems their voices are still in my ears.


[1] Marvelous Possessions: The Wonder of the New World, Stephen Greenblatt (1988)
Posted by Caspar Henderson at 12:35