a foul and pestilent congregation of vapours

This part of Rebecca Gigg's reflection on the death of a whale is a strong taste of the anti-wonder that humans can create:


I read that estuarine beluga in Canada had been found to be so noxious that their carcasses were classified as toxic waste for disposal. Tissue sampling of sperm whales around the world revealed quantities of cadmium that would kill living cells in a lab. (Cadmium, a compound found in paint and industrial manufacturing, and a by-product of burning fossil fuels, causes metal fume fever, fluid in the lungs, kidney disease and cancer in humans.) The most polluted animals on the face of the earth were thought to be American killer whales in Puget Sound, a place where the starfish had been observed actually melting. The data supported a highly improbable hypothesis, even given the levels of contaminants in the area: that the whales had been chewing batteries or drinking flame retardant to supplement their marine dinners.

The gift of time 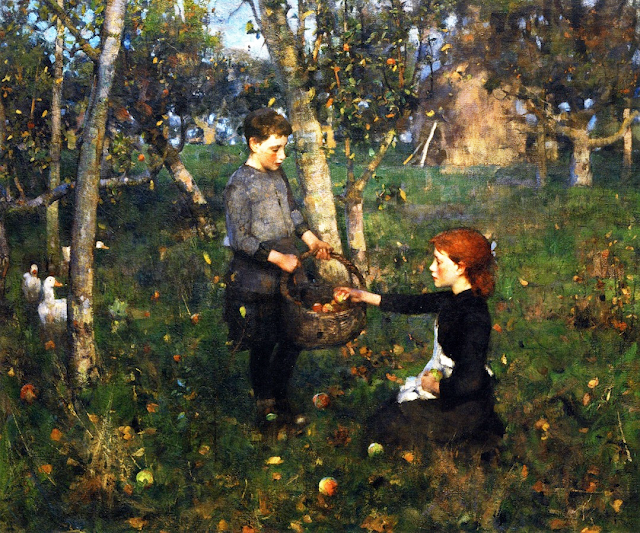 One of the most important characteristics distinguishing man from all other forms of nature is his knowledge of transitoriness, of beginning and end, and therefore of the gift of time. In man, transitory life attains its peak of animation, of soul power, so to speak. This does not mean man alone would have a soul. Soul quality pervades all beings. But man’s soul is most awake in his knowledge of the inter-changeability of the terms “existence” and “transitoriness.”

Image: In the Orchard by James Guthrie
Posted by Caspar Henderson at 23:45 No comments:

Wonders of the Anthropocene

Certainly, the Anthropocene is rich with new sources of wonder...This autumn I went down the Boulby potash mine, on the north-east coast of England. There immense tunnel networks – or “drift”, in the lexis of mining – extend both inland and offshore. They run up to 1350 metres in depth, and up to 8 kilometres out under the North Sea, following the potash and rock-salt seams laid down during the evaporation of the Zechstein Sea some 200 million years ago.

The mining is done by £3.2 million machines, which – at least to my zoomorphic eye – resemble Komodo dragons, low-slung and sharp-toothed...Years later, when a machine has been exhausted by the demands of its labour,... it is driven into a worked-out tunnel of rock salt, and abandoned. Slowly, the pressure of depth squeezes the tunnel, and translucent salt flows around the machine, encasing it. Thus we lay down a future fossil of the Anthropocene: a machine-relic in a halite cocoon. 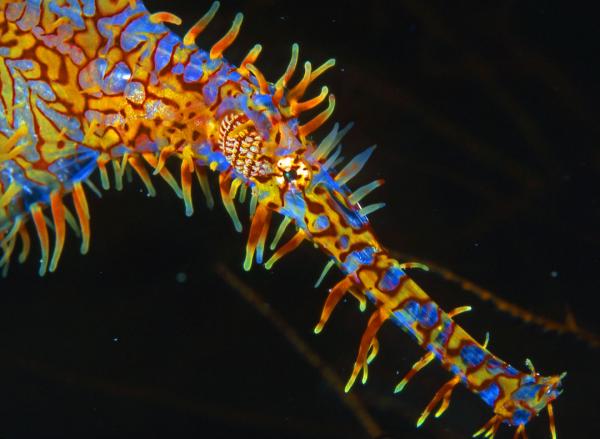 ...what if space — perhaps at something like the Planck scale — is just a plain old network, with no explicit quantum amplitudes or anything? It doesn’t sound so impressive or mysterious — but it certainly takes a lot less information to specify such a network: you just have to say which nodes are connected to which other ones.

But how could this be what space is made of? First of all, how could the apparent continuity of space on larger scales emerge? Actually, that’s not very difficult: it can just be a consequence of having lots of nodes and connections. It’s a bit like what happens in a fluid, like water. On a small scale, there are a bunch of discrete molecules bouncing around. But the large-scale effect of all these molecules is to produce what seems to us like a continuous fluid.

What is space-time really? Stephen Wolfram

Harlequin ghost pipefish from underseaimages
Posted by Caspar Henderson at 08:55 No comments:

‘Death needs to be in the air for us to be fully alive.’

Hunting is often a charged and divisive topic in Britain. In Being a Beast, Charles Foster writes bravely and with honesty about what he has experienced as its attractions:


A man with a gun sees, hears, smells and intuits much more than the same man with a bird book and a pair of binoculars. Death needs to be in the air for us to be fully alive. Perhaps this is because many hunts, before we started to go with high velocity weapons after harmless herbivores, carried a serious risk of the hunter dying, and every neuron had to be strained to keep the hunter physically alive. Perhaps it is because death is the one thing that, without any caveats, we will share with the animals; perhaps the first, exhilarating fruit of that perfect reciprocity is an ability to sense the world as the prey does: it sometimes feels as if you’ve got two nervous systems running ecstatically in parallel — yours and the stalked elk’s.

Speculating on the psychological impact of the transformation in the distant past of humans from prey animal to predator, Yuval Noah Harari may light on something true:


Most top predators on the planet are majestic creatures. Millions of years of dominion have filled them with self-confidence. Sapiens by contrast is more like a banana republic dictator. Having so recently been one of the underdogs of the savannah, we are full of fears and anxieties over our position, which makes us doubly cruel and dangerous.

Posted by Caspar Henderson at 17:46 No comments: 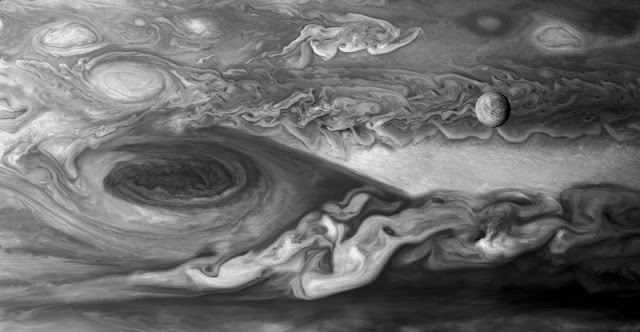 Neurological and informatic models of subjectivity will no doubt have their uses and values, as did mechanistic models of the world before them. Yet, like their mechanistic forebears, these theories are grounded in an insistence that subjectivity is a secondary phenomenon whose explanation resides in something prior. Chalmers wants to insist, along with Descartes and Locke before him, on the primacy of subjective experience or, as the philosopher Bitbol puts it, ‘that consciousness is existentially primary’. Rather than being something that can be ‘described by us in the third person as if we were separated from it’, Bitbol argues that consciousness ‘is what we dwell in and what we live through in the first person’. This feels reminiscent of what the German philosopher Edmund Husserl in 1936 called the ‘life-world’ of conscious experience, and I suspect that it is where we must look to locate the source of our selves. But I also expect that philosophers and scientists will be arguing the point for centuries to come.

I feel therefore I am Margaret Wertheim

See also Is quantum physics behind your brain’s ability to think?

The switch in recognition is eerie: I go from seeing rushing patterns in the sky to the realization that they are made of thousands of beating hearts and eyes and fragile frames of feather and bone. I watch the cranes scratching their beaks with their toes and think of how the starling flocks that pour into reed beds like grain turn all of a sudden into birds perching on bowed stems, bright-eyed, their feathers spangled with white spots that glow like small stars. I marvel at how confusion can be resolved by focusing on the things from which it is made. The magic of the flocks is this simple switch between geometry and family.

The Human Flock Helen MacDonald
Posted by Caspar Henderson at 15:32 No comments:

Shadows of the sky 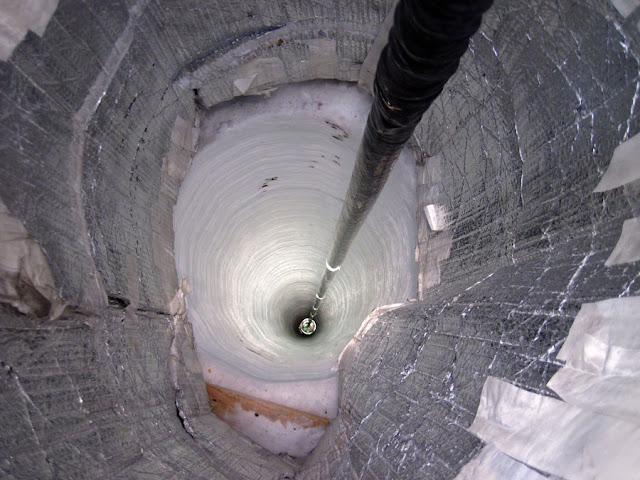 Thinking about neutrinos, I also came across this:


This light tells us much, but I think in the course of time still more delicate and subtle mediums will be found to exist, and through these we shall see into the shadows of the sky.

Photo NSF / B. Gudbjartsson via APOD
Posted by Caspar Henderson at 22:11 1 comment: