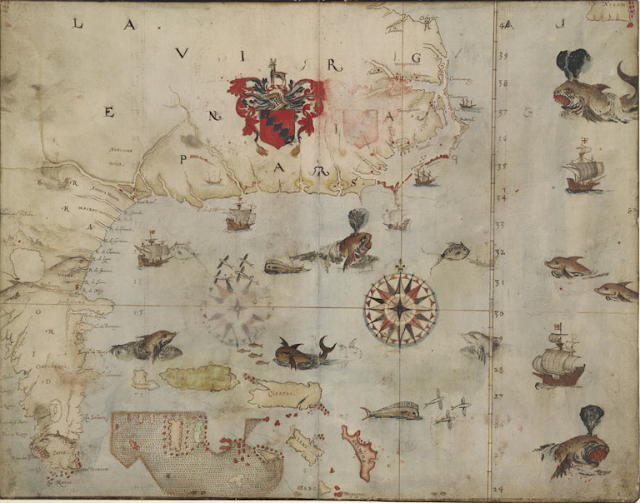 At the beginning of A Short Account of the Destruction of the Indies (1542), Bartolomé de las Casas writes "the marvelous discovery of the Americas...silence[s] all talk of other wonders." Then he reports on one of the worst genocides in recorded history.

About 150 years later, English explorers in North America begin many of their reports with rapturous descriptions of what they find. Andro Linklater writes in Owning the Earth (2014):


The extravagant fertility can be sensed in the language..."the millionous multitudes" of seabird, the "huge flights of wild Turkies," "such infinite Herds of Deare," "innumerable of Pines, tall and good for boards and masts," and forests of oaks with "great Bodies tall and streight from 60 to 80 foot before there be any Boughs in height," all of it fed by soil that was "like to manure" so that "we cannot sett down a foot but tread on Strawberries, raspers, fallen mulberry vines, acchorns, walnutts, saxafras etc."

The waters, too, were wondrous. In The Unnatural History of the Sea (2007), Callum Roberts notes:


Like the rivers in early medieval Europe, those of the New World ran pure and clear through thickly wooded valleys and flood plains that protected the soil from erosion. This newfound clarity must have dazzled people of the seventeenth century used to rivers like the Thames whose refuse-thickened waters slopped London's bridges and embankments.

In some places, according to an account of a 1608 reconnaissance of the Chesapeake tributaries (cited by Roberts), the fish were:


lying so thick with their heads above the water, as for want of nets...we attempted to capture them with a frying pan...

We spied many of them lurking amongst the weeds on the sands, our captain sporting himself to catch them by nailing them to the ground with his sword, set us all fish in in that manner, by this devise, we took more in an hours than we all could eat.