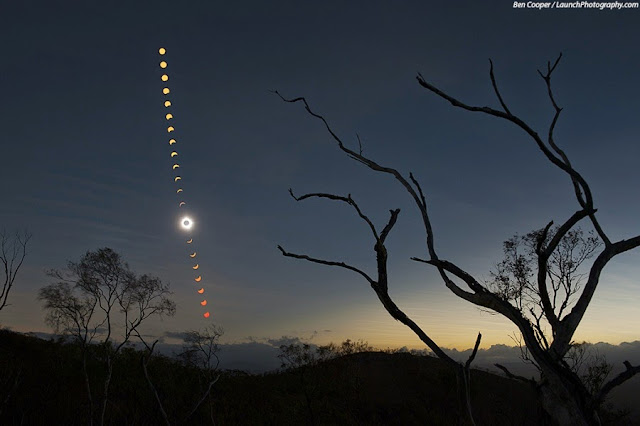 I was on a boat off Baja, Mexico. It was July, but about ten minutes before totality the air started to get noticeably colder, seemingly every second, as the Moon blocked off more and more sunlight. The Sun visibly became a crescent, and the optical effects were overwhelming. Everything seemed to be swimming, the shadows were all distorted into little crescents, and the light was becoming very sharp and angular. I looked up and saw shadow bands flowing overhead as the light [shone] through convection cells in the upper atmosphere. I looked down and saw the eclipse's shadow sweeping across the ocean towards me at breathtaking speed. Then the Moon slid into place, and sunlight shining through its mountains and valleys drew a diamond ring in the sky. The Sun's corona popped out, white and glowing and wavering. I could see the planets all stretched out along the elliptic -- Mercury, Venus, Mars, Jupiter. The whole solar system was right in front of my eyes. Everyone was hooting and hollering and yelling. It was pure primal joy, like that feeling right after a big football touchdown. The eclipse itself lasted something like seven minutes, but it went by in a flash.

Image: Ben Cooper via APOD
Posted by Caspar Henderson at 12:00