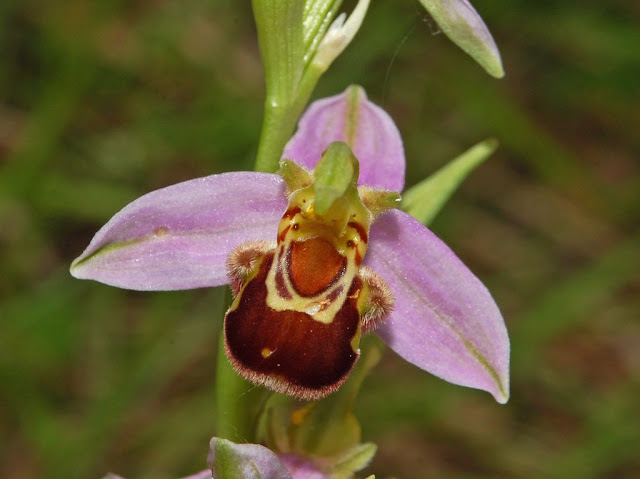 At 10x [magnification] the body shape of the flower was still just about legible. I could make out a covering of fine hairs. Whatever surface they were growing from looked papular and spongy. But I was drawn to the dark inverted triangle at the top, which looked as pubic as anything in a Palaeolithic fertility figure. Against my will I was already sexualising the flower, caught up in the orchid family’s famously sensual aura. At 50x the blooms were transformed into spangled landscapes. The individual hairs were clearly visible now, and tipped with iridescence, as if they carried tiny globules of dew. The whole surface of the plant had the glister of organza. And when I shifted to the dark patch, which now filled my whole field of view, I spotted two glowing crescents on either edge. They were made up of individual spots of blue, like tiny LED lights. I wondered if the light from the microscope lamp was producing these effects, but they were still there when I turned it off. A few minutes later, with the lamp back on, I noticed an extraordinary aroma rising from the blooms – musky, sweaty, meaty. I am sure this was the allomone – a chemical evolved in the plant to exactly mimic the female wasp’s sexual pheromone, and made perceptible to the human nose by the heat of the lamp.

excerpt from Cabaret of Plants by Richard Mabey

See also posts about plants including Led by the Nose on the blog of barely imagined beings. And here's a brief profile I wrote of Mabey last year.

Photo by Hectonichus
Posted by Caspar Henderson at 09:42