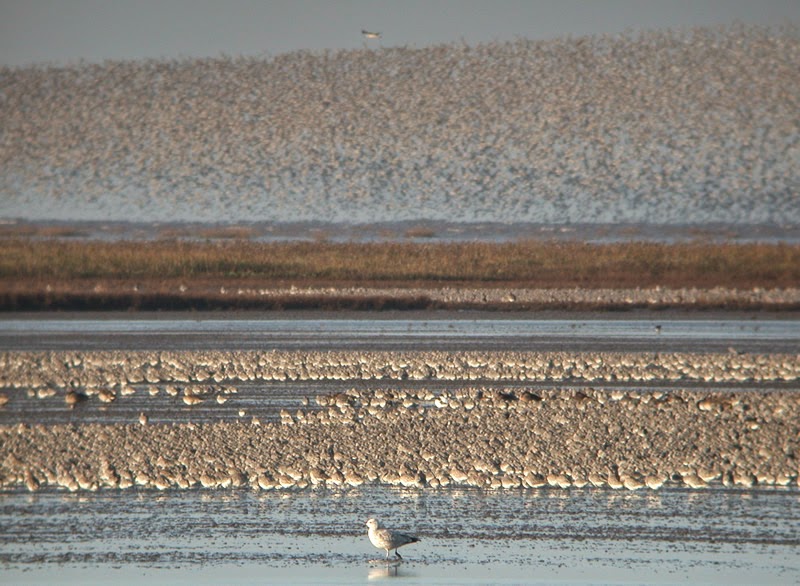 Early yesterday morning I was at RSPB Snettisham to watch thousands of knots, oystercatchers and other birds fly to the onshore lagoons as a spring high tide raced over the mudflats where they usually feed. Lovers of wildlife and the outdoors celebrate the beauty of a flight of knots (can we call it a ‘murmuration’ or is that only for starlings?) in winter plumage. The shifting shape made by thousands of these creatures, wheeling and turning in unison as if they were one enormous sky organism, appears to flash on and off, in and out of existence, as the light alternately reflects off their lighter feathers and is swallowed by their darker ones. [1]

Philip Fisher argues that wonder is “a relation to the visible world” and “an outcome of the fact that we see the world” [because] “only the visual is instantaneous, the entire object and all its details present at once.” [2]

I only agree in part. Yes — of course! — vision is a dominant sense for human beings, and plays a central role in many experiences of wonder. But there are other channels too. One of the things that seized me most strongly and unexpectedly yesterday was the sound of the knots as hundreds and thousands of them flew very fast just a few feet above my head. I cannot, at present, find the words to say exactly what this sound was like. It was not completely unlike the roar of an aeroplane propeller absent the noise of the engine driving the propeller. And it was not completely unlike some kinds of bullroarer — aerophones with sacred associations in some ancient cultures. But it was not very like them either. It was like nothing except itself.

I am starting on a section of the book about sounds, and dug up a couple of paragraphs from my review of Sonic Wonderland by Trevor Cox:


…for those with ears or other means to hear, the universe is full of, if not exactly sounds and sweet airs that give delight, then certainly hums, thuds, moans and much besides. Black holes project the B flat 56 octaves below middle C across the intergalactic cloud. Sound waves reverberate through loops in the Sun's outer atmosphere. A keen wind shuffles rock grains through the thin air on Mars. There is a roar on the other side of silence.

Our own planet never stops making noises. Microphones placed by the Dutch artist Lotte Geven almost six miles deep in Bavaria's KTB borehole reveal a rich audioscape of echoes and crunches. Sand dunes near Al-Askharah in Oman sing notes of every frequency from 90 to 150 hertz, or F-sharp to D. Across the world's oceans, rumbles, cracks and echoes of eruptions, rockslides and tectonic movements carry for thousands of miles. For billions of years green-blue algae have produced tiny bubbles of oxygen that click and pop as they rise to the surface...


P.S.  It turns out that this week the wildlife sound recordist Chris Watson has a series on BBC Radio 4: Soundstage. Today it's the Kalahari, barking geckos and all.  On 25 March he is presenting sounds from The Wash.

[1] See this description by Robert Macfarlane

[2] This is from Wonder, the Rainbow and the Aesthetics of Rare Experiences (1998). Much of the time I find myself alternately agreeing and disagreeing with Fisher. “The object of wonder must be unexpectedly, instantaneously seen for the first time.” Well, yes; but wonder can also deepen with greater understanding, or with return after absence. “For wonder there must be no element of memory in the experience.” But experience only exists within a theatre of consciousness where memories of various kinds are heavily involved in humping the stage machinery into place. “Wonder in its first moment stands outside will.” Yes


Image: Bogbumper via wikimedia
Posted by Caspar Henderson at 12:09